On a misty and grey Saturday morning, I arrived in Dorking raring to go for my first ever fell race – The Boxhill Fell Race organised by South London Orienteers. I’d managed to secure a place in this popular race just a few days before, when a fellow Fulham RC member offered up his race number and without even thinking I jumped at the chance to give it a go. It was only when I looked up the race details – 12km with over 500m of ascent – that I realised I might have bitten off more than I could chew. Nonetheless, I had hill training and cross country mud running in my legs, so I went into the race feeling positive and relaxed, my aim was to just get round and enjoy it.

Race registration was at the Aviva Sports and Social Club, just a few minutes walk from the train station, so finding fellow runners stepping off the train I followed the pack and headed to pick up my number and get ready. I had a look at the course map and in particular the contours so I knew where to expect the hills, but discovered the route was full of steep climbs and even steeper descents, so just got ready for a challenging and undulating race!

Just before 11am, we jogged down to the start line near the famous Stepping Stones at the bottom of Boxhill. I was lucky to have fellow Fulham RC friend Justin close by to warm up with and calm pre-race nerves, he’d run around these muddy trails before during the Three Molehills race in November and is preparing for the North Downs Way 50 later this year which also takes in this route. Also at the start line were three Wimbledon Windmiler ladies who I recognised from the XC league races, so I said hello and set myself a goal of sticking with them for most of the race. 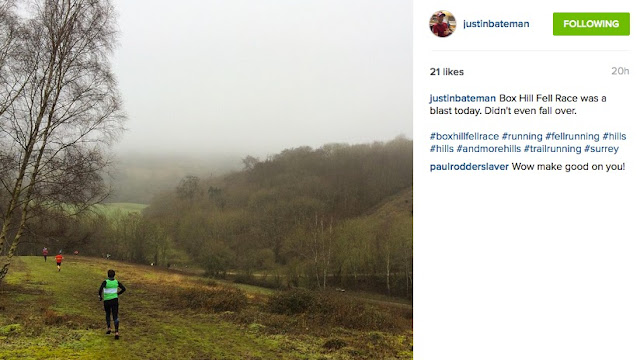 Pressing the start button on my new Epson Runsense SF-810 watch (I’m trialing this and uploading video reviews here) we were off, starting the race as we meant to go, uphill. Straight up the dreaded Boxhill steps, up and up until we reached the top and flew ourselves down the grassy slope to start the loop around the hill. As much as I’d love to describe the route for you here, at no point did I have a clue where I was, apart from how far we had to go to the finish. Every hill climb came as a surprise and every descent an even better one. The terrain was pretty much perfect, wet, muddy, a little bit rocky but all very run-able. The organisers had done a great job of marking the route and there were friendly marshals on course too pointing the way and cheering everyone on. After more than 10km I recognised the top of Boxhill and the familiar steps we’d hauled ourselves up at the start. This meant one thing – the end was in sight and it was all downhill from here. Knowing this I simply let myself go and overtook several runners, including two of my Wimbledon Windmilers I’d kept in sight for the race, hurling down the steps. I got to the finish, stopped my watch clocking 1:24:41 and realised I had a huge smile on my face. That was one of the best finishes to a race I’d ever experienced, such a thrill and a great way to end a tough fell race, and my first! (of hopefully many!)