Ever since I watched Kilian Jornet’s ‘A Fine Line – Summits of my Life’ I have been hooked on running adventure films. In May I was lucky enough to see the amazing film of The Western States 100 race, Unbreakable, featuring Kilian and other inspiring runners. On Wednesday evening, I was so excited to watch another race documentary, this time from here in the UK – The Montane Spine Race – created by Summit Fever Media and shared through a Like The Wind magazine event.

Like The Wind magazine is a new find for me and I love everything about their ethos. It isn’t another run-of-the-mill sports magazine with training tips, kit reviews and advertising, it’s different. Unique. It brings real runners stories and journeys to life with honest anecdotes and inspiration tales, and combines this with incredibly striking illustrations and photography. I wasn’t surprised to see they were holding an event to showcase the release of the Spine Race movie, it’s exactly what they’re about – sharing incredible runner’s stories first hand.

Summit Fever Media were also another new discovery for me. They describe themseleves as Adventure and Endurance Race Film makers and go to extreme lengths to shoot outstanding footage and bring the excitement and energy of these races to the public.

So to the race, and the film…
Last Wednesday evening I crossed the city and found The Proud Archivist on the banks of Regent’s Canal, a combined gallery, bar, restaurant, cafe and event space and the setting for the film screening. When I arrived I knew immedietly that I was at the right place as the bar area was crowded with runner lookalikes cladded in lycra, backpacks and trainers. I grabbed a homemade lemonade and we were taken to our cinema for the evening before being introduced to Simon, the brains behind Like The Wind and our host. We then sat back and watched the epic race unfold. 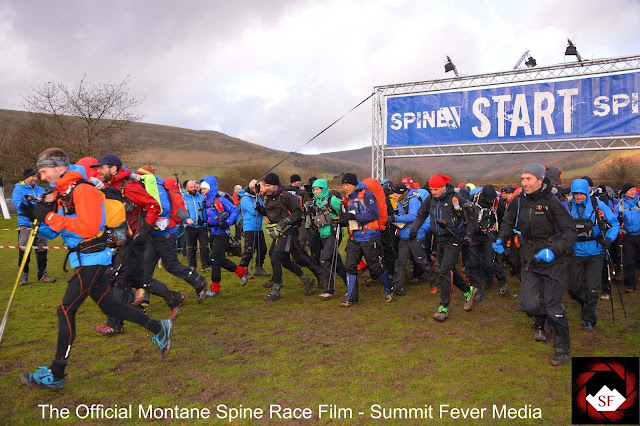 The Spine Race – 268 miles from South to North along the entire Pennine Way, starting at Edale in the Peak District and finishing in Kirk Yetholm, Scottish Borders. It’s a non-stop, self-supported race that takes place over 7 days in January and challenges anyone to test themselves and compete in truly demanding Winter conditions. The film captured the best bits of the runners’ journeys – their physical and mental ups-and-downs – and the organisers’ planning and support. It truly baffled me why anyone would want to put their bodies through this extreme challenge, a constant battle of mind over matter with little sleep and for the most-part a lonely expedition.

After the film, we were given the opportunity to chat with one of the race finishers Damian Hall, who is also author of the Pennine Way National Trail Guide. He is a great storyteller and one of the runners that the film team focused on and followed closely during the race. He finished 3rd this year, just ahead of the first lady, Beth Pascall, who from a female runner’s perspective is out-of-this-world awe inspiring.

Before watching some funny outtakes of the film, we also chatted to the team of two from Summit Fever Media who were behind the camera and got an insight into their race journey. It was so interesting to hear their stories of how they followed the runners and captured the best footage for the documentary and it made the film we’d just watched even more inspiring.

I really enjoyed the film, it was honest, raw, gritty and nail-biting at times. The entire team from the runners, race organisers, supporters, marshalls, medics and film crew worked together so well and it was clear they really had a real family bond, which made watching the race so special. If you want to feel inspired too, the film is now available to buy and you can preview it here.