This Sunday past was a memorable one for many – Father’s Day here in the UK, International Yoga Day, Summer Solstice, female runners racing the Nike 10k in London and for me, my first attempt at the infamous Seven Hills of Edinburgh challenge. 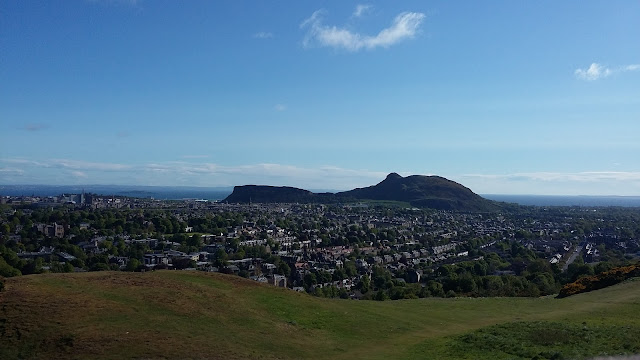 As Edinburgh is my home city I’d always wanted to give this race a go and having been a supporter at the event for the last few years, this year I decided to sign up and bite the bullet. It’s a tough one, 14 miles through the city and beyond, taking in its finest hills including Arthurs Seat waiting for you just before the finish. The first rule of the race is that there is no set route, you’ve just got to navigate your way between the seven hills as quickly as possible. Obviously over the years with an increase in runner numbers it’s hard to go wrong along the route, especially at the start when you can just follow the pack. It gets a little more challenging through the latter sections though when experienced runners have their favourite routes, which may be the quickest but also more technical and could involve serious ascents or descents and even some rock scrambling. That’s what this race delivers that others don’t – challenging fun through both the city and its beautiful surroundings on roads, trails and the grassy hilltops.
My training leading up to the race was pretty good, some endurance for the long distance and hills for the…hills, obviously! I’d recce’d the course with Nige a few months ago and at a steady pace with some stops for fuel/photos we’d got round in just over three hours so I was hoping for something sub 2:45 on race day. My aim though, knowing how tough the race is, was to feel good throughout and ‘save something for Arthur’ – the last and biggest hill in the race with multiple options of routes for both getting up and down. I wanted to feel like I had left enough in the tank for the climb and be able to descend quickly to the finish. 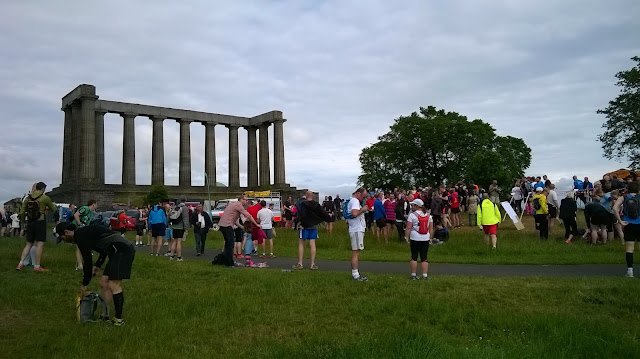 RACE DAY
A leisurely 9.45am start for the challengers (including myself) and a half hour gap for the racers who would be nipping at our tails and overtaking us later on in the morning. I got up to Calton Hill for race registration, which was just picking up my number and dropping my bag, both super slick and easy, a short queue for the portaloo and a snappy warm-up. Weather conditions were perfect for running, dry, mild with a slight Scottish breeze, and I was glad I’d chosen this race for my new Fulham RC vest’s first outing. 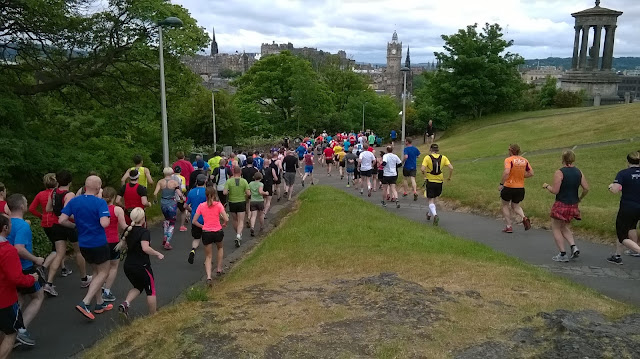 We set off bang on time with a crowd of nearly 300 runners piling down the narrow steps off Calton Hill, over North Bridge and up Edinburgh’s famous Royal Mile, already lined with tourists! Our first checkpoint was the Castle Esplanade and here, dangling from strings hung up and lined along the railings, I found the clippers – red, stapler-like tools that we’d find at each hill top and use to stamp our vest number to show that we’d reached each peak. As the race had only just begun there was a scramble for these, runner’s arms everywhere grabbing and stamping, but I sneaked in and quickly got it done and then was on my way winding down through Princes St Gardens. 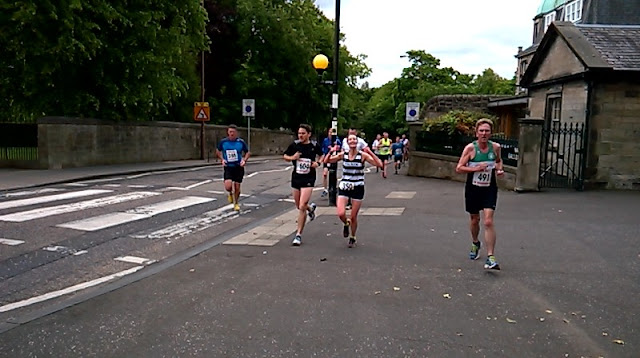 Cheers from supporters who were cycling the course led us all the way to our second hill, Costorphine, home of Edinburgh Zoo. Just before the top, a lovely bunch of helpers had laid on a spread at a water station, orange squash, chocolate crispies, all sorts, but it felt too early to take on anything so I just grabbed a cup of water and sipped it as I ran up to the checkpoint.
I felt good coming off the hill but I knew the worst part of the course was just ahead of me, not in terms of climb or difficulty, but mentally as it’s through residential areas of the city I’m not familiar with and involves a few busy road crossings. Nige caught me up on the bike though and got me through it, handing me a Nkd bar and my drink just before the scramble up the slope to our third hill, Craiglockhart. This was tough, not only because of the climb but as I reached the top I really felt it in my legs, just because they’d stopped running and I had to will them to start again. There was a loud bunch of supporters with cut oranges and water at the top though so I grimaced my way through it and enjoyed the nice descent through the trees. 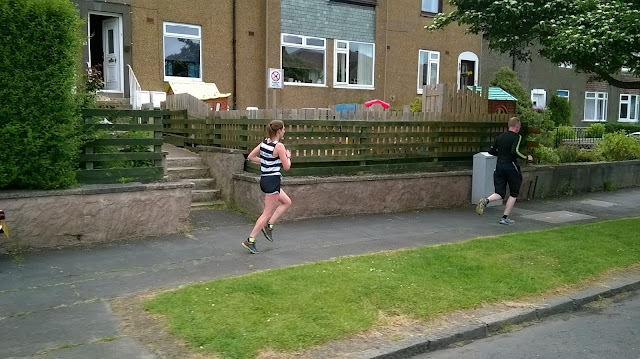 The streets between Costorphine and Braids are always a bit of a blur, I was following other runners so the route was fine, but I always seem to blank this part out of my memory. I just remember coming off the road before the final climb to the top of Braids, the fourth hill, to another amazing group of supporters who’d set up camp in the boot of their car and had buckets of water and sponges out to cool runners off. For a second I was tempted, it was hot and I was sweaty, and then I thought of the other runners before me and how sweaty they would have been and quickly swerved the sweaty wet sponges! At the top of Braids alongside the clippers were a bag of jelly babies, such a lovely thought! so I grabbed a pink one and bit its head off then carried it with me down the hill and over the golf course to Blackford. 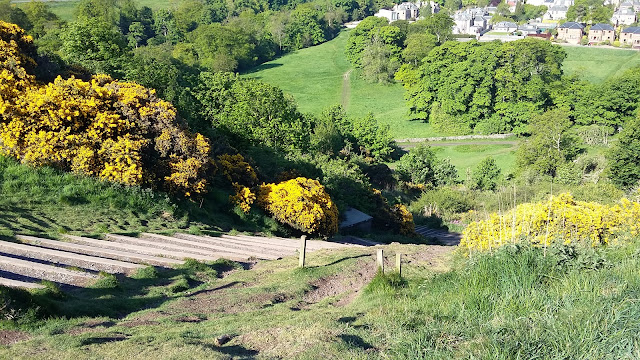 Hill number five – Blackford – but before even getting to the start of the climb came a mind game, trust yourself or the runner in front? There’s a long, winding, easy route or a harder, steeper but significantly shorter route. You’ve got to be able to find the short route though and unless you’ve done it a few times you could end up getting lost in forest trails not knowing which direction you’re heading. I wasn’t too confident of finding the shorter route but the longer one was so much longer I didn’t want to have to do it. There was a runner in front who seemed pretty confident of the course, he’d been ahead of me for a while and I’d been watching the routes he’d taken. As we got towards the Hermitage of Braid he turned in a direction I knew to be the start of the shorter route so I sped up to catch him up then followed closely behind. We found the steep, technical ascent and I started climbing, watching the footsteps he took and the tree routes he clung onto, while also trying to avoid looking down! I got to the top muddy-handed though and found the steps that I’d used for hill reps a few weeks ago. I could hear a bagpiper at the top of Blackford belting out the tunes so I ran towards the sound and was greeted with handfuls of Haribo Tangtastics from several kids, cheers from large crowds for a quiet Sunday morning and stunning views over the city. I felt good and as we ran down Obervatory Road to the allotments I was quite surprised how fresh my legs felt. I’d been running for 1:45 so in my head I still had an hour to run but with the final two hills to go I thought I would easily reach my target so pushed on. Then it hit me. CRAMP. What the hell? First in my right calf then moving into my left. I’d never experienced anything like it during a run and I panicked. Do I try to keep running, slowing as my calves tightened, or stop and ease it out? Initially I just kept plodding, but runners were passing me and I felt like I was hobbling. I gave in and stopped at the side of the pavement, grabbed onto a tree for support and started peddling my legs up and down, stretching my calves and the cramp eased. I was off again. 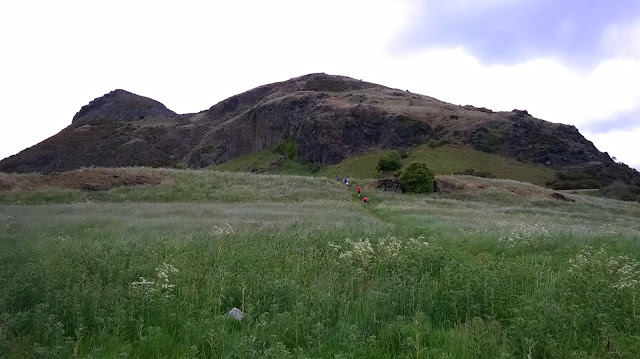 At the gate of Pollock Halls, the university residences, we were again greeted by a big support group and instead of heading around the Commonwealth Pool as I usually do, I followed the crowd into the residences and then joined a queue of runners to limbo through a small gate into the park at the bottom of Arthur. I saw Nige and he passed me a drink before the ascent, a hands on knees, push, don’t look down, grit your teeth, you’ve walked this a million times over, one more after 13 tough miles won’t hurt, hellish climb that felt like it would never end. I think we went the wrong way and by wrong I mean the long way, zigzaging up slowly, missing the direct path, but we got there and it felt so good to be up and standing on the cairn at the top for all of a second. I looked over to Calton Hill where we had started and where the finish line was only a mile away. The cramp had come back again and was nipping at my calf as I headed down the hill, but I kept at it and the biting pain eased. I made it down to the Scottish Parliament and knew there was less than a mile to go, so caught up with the runner in front and stuck with him. I could hear the crowds at the top and tried to kick for home but my legs were empty, drained, heavy. Onto the grassy finish and over the line, I collected my coaster and grabbed a banana before plonking my bum down on the grass and closing my eyes. I was exhausted, but happy. I’d finished and more importantly I had felt strong for the most part. 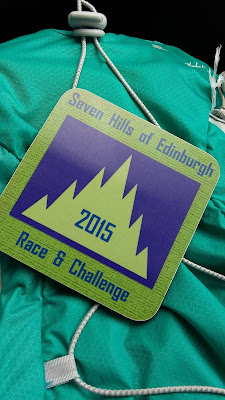 I hadn’t realised how much the race would take out of me but for the rest of the afternoon I had no energy and had to have a nap before dinner! Oh dinner though, what a treat – perfect post-race refuel at Civerino’s, a new Italian restaurant close to the Royal Mile. Those pizzas! and celebratory bubbles to cheers to an amazing race, one that I will definitely be back for in years to come. Thank you Edinburgh Seven Hills, I knew you would deliver a challenge but that was something else! 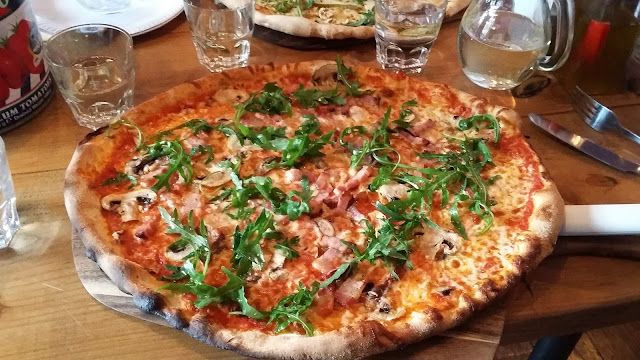