This post was inspired by Charlie from The Runner Beans’ blog. If you’re not a reader then I’d recommend you check it out, it was one of the first running blogs I read and it’s introduced me to the world of fitness blogging as well as some of my London running buddies. 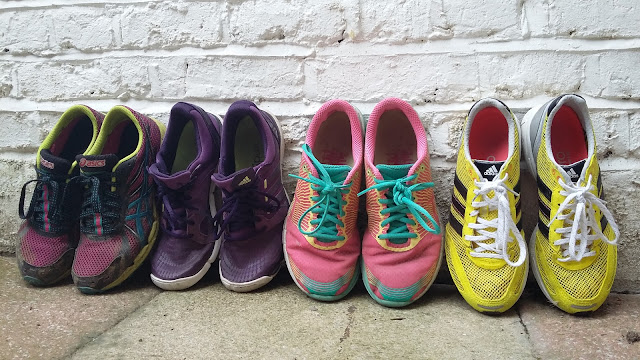 I only started writing this blog in March this year and I’ve only been documenting the running that I’ve been doing in London, where I’ve actually only lived for a year. I grew up in a teensy tiny village in the Scottish Borders and for the first 18 years of my life the rural way of living was the only thing I knew. I moved to St Andrews for university, a small town that was a big shock to the system and then Edinburgh, an even bigger city, but one that I now call my home city. London – well, as a true country bumpkin it’s somewhere I never thought I’d live, but for now I’m embracing it and getting the most out of it while I’m here.

Growing up in the countryside had a big effect on how active I was as a kid, we were always playing outdoors, in the parks, down the lanes, in the fields, up trees, and running was always a part of my life because of my parents. They were both keen runners (see classic post-marathon photo below), Dad especially so, and members of our local running club, Gala Harriers. When I was in primary and early secondary school, I remember our holidays always involved sport, mainly athletics, and we would go to Startrack for a week of coaching and games at our local athletics track (Jessica Ennis started her athletics career taking part in Startrack as a 10 year old!)
A lot of our weekends were spent travelling to races that Mum and Dad were taking part in, which at the time I think I despised, but looking back on it gives me a warm, fuzzy feeling inside. I love cheering on runners in races now and I’m bloody good at it – forever the shy quiet one, but stand me at the side of a race and I become the most vocal of supporters. I learnt the art of race cheering early on and it was ingrained within me from a young age.
We didn’t run many races as kids, but one I do remember is the Junior Great North Run, firstly because of the horrendous car journey down (Dad had to pull over multiple times!) and also because it was a race we’d been watching on TV for years. It’s so iconic, with the memorable music and the runners streaming over the Tyne Bridge, and I remember how amazing it felt to be running around Newcastle as part of that race. The London Marathon was another race we grew up watching, both on a Sunday morning from the sofa and from the pavements around Tower Bridge. As a family we would often make a Spring holiday of the event and plan our tourist trip visiting the sights around supporting the marathon runners. It’s still one of my favourite races to watch and I can’t believe I now live in the city itself and get to be part of it (fingers crossed for the 2016 ballot!)
In my later teens I was old enough to start training with my local running club and entering 10ks, which felt so grown up to me. We didn’t have a nearby Parkrun, but I’d take part in local races and also tried some duathlons and triathlons. I don’t think I was any good but I enjoyed it and that was the main thing, I felt part of a team and more part of my own family because I could now join in instead of standing at the sidelines.
When I moved away from home to university I kept up my running, but remember being singled out as the one who wore lyrca and trainers and would go down to the beach for an hour to let off steam instead of going out drinking or staying curled up on the sofa. The infamous stretches of sands in St Andrews that were used in Chariots of Fire were my new running track, and I spent a lot of my time there, breathing in the sea air and sprinting up the dunes. I joined the cross country team in my first year to make new friends, but ended up mostly running solo and using it as a way to unwind and think through the stresses of revision and exams.

When I moved to Edinburgh I got my running mojo back and started using it as a way to explore the city. I found parks, trails, the canal, the beaches, Arthur’s Seat and quickly learnt that Edinburgh had everything to offer for my running needs. I entered races, mostly charity ones like the Race for Life,  and began taking running a bit more seriously, seeing how far I could push myself.

I met my boyfriend Nige nearly two and a half years ago in Edinburgh and although I was already well into my running phase, things changed up a gear. Two runners in a relationship means time spent together can also mean time spent running. The more you run, the more you want to run. At first, I didn’t want to run with him, even on training runs, scared that I’d hold him back or that he’d realise how bad a runner I was. It took a long time for me to be comfortable just stepping out for a run together but now I forget about the pace or distance and we just run.

I remember one of the first races we signed up together for was the popular Black Rock 5, a five miler along the Fife coastline and a wet one if you get the tide timing wrong! I said to him as we stood at the start line ‘Remind me never to sign up to any race again,’ and sometimes that’s still how I feel at the beginning of races, ‘why am I here?’ ‘what is the point of this race?’ Usually when I finish I’m in a different state of mind, glad that I signed up and ran, but sometimes I don’t run well or just have a bad race and it puts me off running races and running in general.

For me running has always been, and I think will continue to be, a way leaving everything at the front door and clearing my head space. I have time to myself to just think things through, anything I’m struggling with at work, with friends or life admin in general. I think that’s why sometimes I question the purpose of races, because for me there doesn’t have to be a reason to run, you just get out there and do it. For yourself.

Now living in London, running has introduced me to areas I would’ve never explored otherwise and helped me feel like part of a community in a city that at first felt quite overwhelming. I’m signing up to races as a chance to meet other runners and have made friends through running that I could never have met if I didn’t run. For the first time in my life I have a training schedule and a goal of a marathon to work towards. I go out to run to not only clear my head but to build my fitness and strength in order to cross that 26.2 mile finish line with a smile on my face. I wonder where my running journey will take me next?

What is your running journey? Why do you run? Share your thoughts in the comments and happy running!